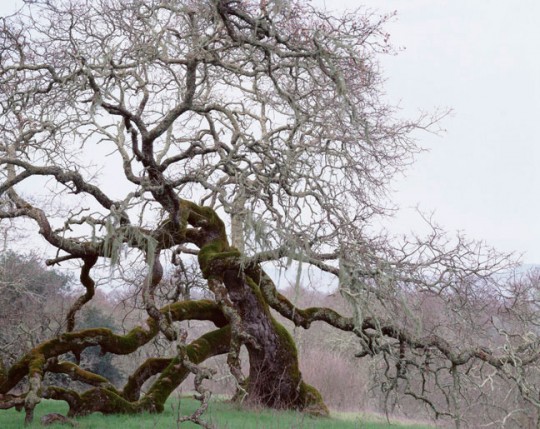 Ken Gonzales-Day, RUN UP, 2007, LIGHTJET MOUNTED ON ALUMINUM, EDITION OF 5

Does knowing some background information about artwork really matter? Or, should everything you need to know about an image just be sitting there, exposed and open for scrutiny?

Ken Gonzales-Day’s series, Hang Trees, part of his exhibition at Luis de Jesus Gallery in Culver City, elegantly decides this question with a visceral sucker punch heightened by the very invisibility of its source information.

Walk into the gallery and you are confronted with beautiful photos of oak trees and probing, high-focus portraits of young Latino men. Lovely, but so what?

Here’s what – a background story:

Several years ago, photographer and Scripps College Art Department Chair, Gonzales-Day began a new project by searching for early 20th Century images of Latino men from California archives. The sole images that he could find were photographs and souvenir postcards in which the only young Latino men present were the recent victims of lynchings.

The artist then went on to research these lynchings and ultimately distilled his results in the definitive book on the topic, LYNCHING IN THE WEST:1850-1935,  which describes, in detail, the racial nature of vigilante justice documenting 350 lynchings  in California. And, “while many persons of white, European, Asian, African, and Native American descent were lynched, that Latinos of Mexican (and Latin American) were more likely to be lynched than any other racial, ethnic or national group.”

The trees documented in this exhibition are from California locations that Gonzales-Day concluded were the sites of near-forgotten, racially-motivated lynchings. The portraits are of men who strongly resemble some of the documented victims.

Many of the lynching locations are now the sites of contemporary streets and buildings. Perhaps, the one in which you are sleeping tonight…

Do you feel a bit sick?

Sometimes, a little outside knowledge can change everything.