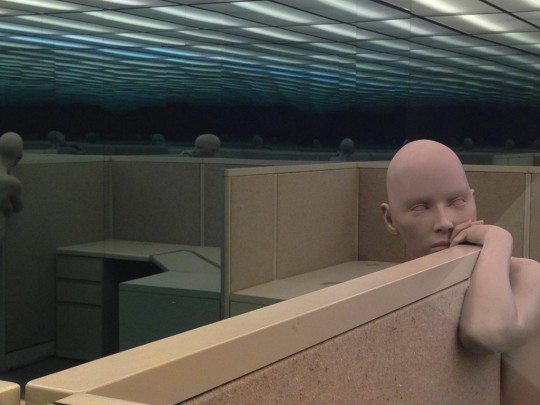 In an alchemical transformation, Burford combines three familiar visual components to reveal something new, poignant and ripe for interpretation.

Two life-size, fluorescent-lit, beige office cubicles are each inhabited by a sculpture of a similarly beige-hued female nude, who appears bored in one tableau and frightened or anxious in the other. Each cage-like diorama is walled with two-way mirrors, visually multiplying the cubicles and nudes ad infinitum and from all vantage points.

The isolated components are pretty common: the cubicle – shorthand for entry-level office life – from the comic strip Dilbert to virtually every film or television portrayal of the American white collar world from the last 25 years; the life-size figure – bearing art-historical baggage spanning from Greek statuary to George Segal’s melancholy plaster people; and, the hall of mirrors – a feature as familiar to the courtesans of Versailles as it is to today’s carnival attendees stumbling through a fun house maze. What is so “Los Angeles” about this?

Years ago, Los Angles artist Roy Dowell recounted a conversation with his partner, painter Lari Pittman, in which they generalized that, at the time, the single factor which most differentiated Los Angeles’ artwork from New York’s was that unlike the east coast approach – which distilled art making down to a single purpose, gesture or image – artwork from Los Angeles was an impure form, combining seemingly unrelated components to ignite an emotionally hot form of visual communication. Kristian Burford’s exhibition is a textbook example of that sort of a Los Angeles approach. Found objects, handcrafted figures, and smoke and mirrors (well, mirrors, sans the smoke) are combined simply yet to explosive effect.  All of these parts might very legitimately have been used alone to create something interesting, but probably not something as accessible, evocative and psychologically engaging as what Burford delivers here.