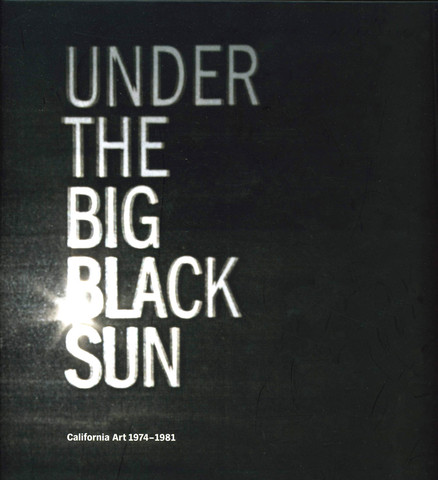 Okay, I finally made it to Under the Big Black Sun: California Art 1974-1981 at MoCA’s The Geffen Contemporary and had the unusual skin-crawling experience of feeling simultaneously exhilarated and disappointed – a fundamental conflict between my artist self and my Los-Angeles-Art-Gallery-Tours-director self.

The artist in me was excited and impressed by the sheer scale and depth of the exhibition, which fills the entire cavernous space with socially engaged and/or socially engaging artwork. Almost everything on exhibit demands slow, rewarding examination – and dutifully delivers, piece by piece. Much of the art on display represented unfamiliar works by familiar artists or work by people whose artistic contributions were slightly before my time and slightly outside of my own familiar California canon – so the show was a really juicy eye opener, at the very least. Note to self: buy the catalog!

I loved the fact that the premise of the show felt so pointed and ambitious,  hubristically suggesting that this period of California’s artistic production, between President Nixon’s resignation and Ronald Reagan’s inauguration, represented a tectonic shift in the history of art whose aftershocks can still be felt to this day.  By drawing artists’ interests away from the ancient, steady march of stylistic and material developments in painting and sculpture to instead focus on a much more heterogeneous aesthetic, driven by content – this work may really have helped inspire, if not create, the heterogeneous style that defines much of today’s most cutting edge work.  And, as a California artist, this makes me feel (completely unjustifiably) proud.

Disappointing to the joyous part of my soul that drives me to share artwork with other people, is the strangely dated feel of much of the work in the show. Much of it is like candy for artists and other art junkies – but the work feels physically old and perhaps not representative of the best work by artists of that period.  It can be hard (but not impossible) to get people excited about, without seeming like a fussy docent.

This may be the result of the work itself, but more likely it comes as a result of how it is displayed.

Almost nothing feels as strange or even precious as it might feel in a more intimate gallery setting. Context is very important for artwork that methodically and (pseudo) scientifically examines topics more traditionally dealt with in the social sciences. Part of what made this work so compelling was just how strange and jarring it once must have felt in a gallery and the aesthetic confusion and conceptual readjustments which necessarily followed. Instead, a lot of the show feels like bland science fair displays, since maintaining the contrasting context of museum-like setting was almost completely neglected by MoCA’s exhibition design team.

However, the artist in me would like to point out that maybe this is a very good thing – and simply the ultimate sign that the influence of of ’70s California artwork is so ubiquitous that at least the people who work at MoCA no longer feel this work needs a precious setting to look like art.