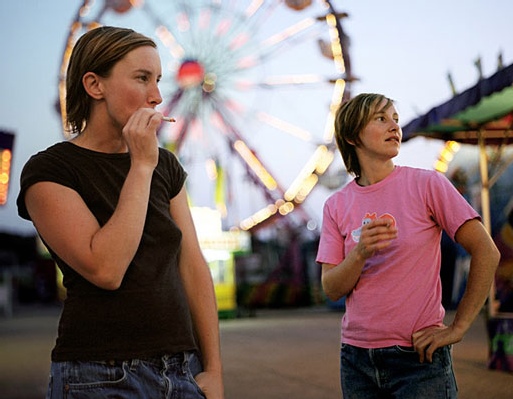 Sometimes stories are so believable that you accept them as fact. Such is the case with photographer Kelli Connell‘s work at Kopeikin Gallery in Culver City.

The Oklahoma-born, Texas-educated, Chicago resident’s exhibition, Double Life, seems a warm and thoughtful documentation of the shared lives of a young lesbian couple. Some of the scenes reflect mild tension, while others present gently-staged, playful fantasy situations. The pictures are never hyper-theatrical, strident or exploitative. The genuine love and connection communicated between the two women is palpable, whimsically romantic and refreshingly pure in its bare-bones simplicity.

The only thing is that, in actuality, the two women in the images are one and the same person. Friend of the artist, Kiba Jacobson, is costumed and seamlessly Photoshopped to seem convincing at-home with… herself. Oops, there goes the illusion of love.

So, melancholy-effect-of-the-lost-illusion aside, there are plenty of nagging questions which now come into play:

How does one portray fictional love so convincingly? What sort of elaborate light and shadow tricks are necessary to make posed and digitally altered photographs look so believably candid? How can one woman, with apparently very little make up, transform herself so completely so as to pass viewers’ initial inspection? 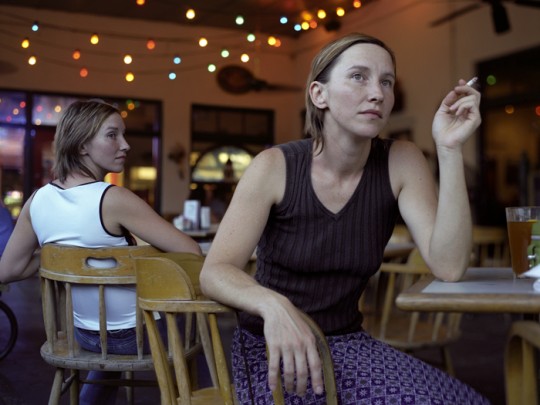 And, more importantly, what role does narcissism play in love – or at least in the appearance of love? that old chestnut – can we really trust anything we see anymore? Or, are these images really representations of the yin and yang of a single human psyche? 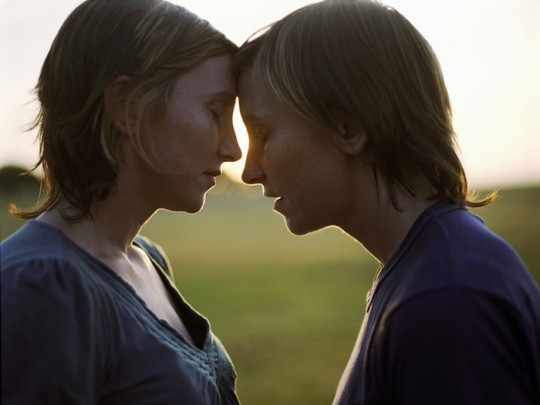 None of these questions are answered, of course, but Connell’s photos offer plenty of space for thoughtful lovelorn rumination.